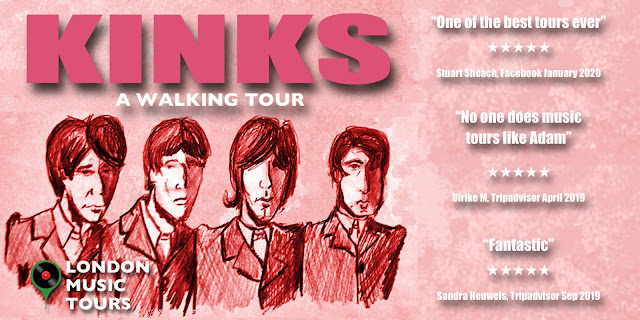 “Best ever London music tours… no one does music tours like Adam”
★★★★★
Ulrike M, Tripadvisor

4 of the unlikeliest pop stars of all-time

People… How and where Ray & Dave Davies changed the face of popular music and became the most notorious feuding brothers in rock’n’roll.

It's a walking tour… venues, homes, schools, dance halls, parks, cinemas, pubs where they played and composed and the stories behind Waterloo Sunset, Autumn Almanac, You Really Got Me, Come Dancing, Muswell Hillbillies and others.

Adam Scott-Goulding is a qualified, award-winning tour guide with 15 years experience of curating and leading guided tours in London. Music tours are his speciality.
He first heard You Really Got Me at the age of 13 and it ruined his life… in a good way. He once spent £4.99 on the double album Spotlight On the Kinks leaving himself short of bus fare – and trudged home 8 miles in the rain wearing leaky, suede Chelsea boots but still says (37 years later) that it was totally worth it. (That’s how we rolled before Spotify.)

The route covers just under 1.5 miles, it is wheelchair accessible and will last approximately 1 hour and 40 minutes (roughly the time it takes to listen to the albums The Kinks [1964], Something Else [1967] and The Kinks Are The Village Green Preservation Society [1968] back to back)

Muswell Hill Buses (For the end of the tour)