The Last Party: Britpop, Blair and the Demise of English Rock
By John Harris 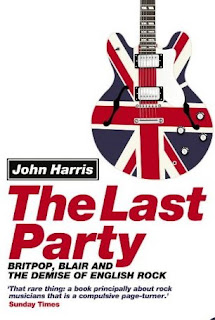 John Harris’s The Last Party is an honourable exception on the first two counts.

Set against the backdrop of Tony Blair’s rise to power, The Last Party is the tale of Britpop – the mid-90’s explosion of British indie music into the mainstream.

Author John Harris – contributor to Q, Mojo, Rolling Stone and The Guardian, amongst others – is a writer whose dry wit always staves off the excitable excesses that so upset Mr Zappa. Harris was also an eyewitness to the events chronicled in The Last Party, working as he was for the NME at the inception of what became Britpop. His gifts as a writer and his proximity to the events make him the perfect man for the job.

And he has quite a cast of characters to work with. Blur slugging it out with Oasis for the Number One spot – a story that made the headlines on the BBC 9 O’clock News. Oasis’s Noel Gallagher visiting Tony Blair at 10 Downing Street. Oasis label boss Alan McGhee and his climb to the heights as a rock’n’roll visionary and subsequent descent into breakdown.

Many of Harris’s interviewees – particularly Justine Frischmann of Elastica – are prepared to put their side of the story free from any “showbiz” sheen – warts, needle marks and all. A far cry from Zappa’s “people who can’t talk”.

London locations abound – from Camden Town to Soho to Westminster – capturing the capital at a time when, as Harris sees it, the leftfield creative artists of British music began to chase the dollar and not the artistic glory, when politicians began to follow focus groups rather than ideology. Blur’s Alex James falling out of The Groucho with the other “celebs”; Jarvis Cocker gatecrashing Michael Jackson’s BRIT Awards stage show at Earl’s Court and being questioned by police for his trouble; Damon Albarn at the House of Commons; Noel Gallagher holding court at Supernova Heights, Belsize Park.

You will do well to remember Frank Zappa when you pick up The Last Party – his quote is always a good starting point for rock biography. But 300-or-so pages later, you’ll be closer to the quote often attributed to Hunter S. Thompson:

"The music business is a cruel and shallow money trench, a long plastic hallway where thieves and pimps run free, and good men die like dogs. There's also a negative side."