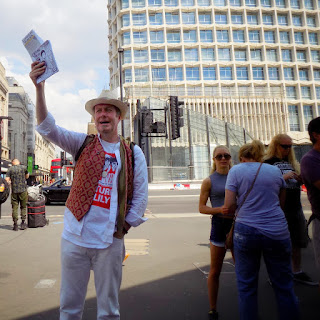 For Father’s Day 2019 I’m offering exclusive, private One Hour Highlights tours on Sunday 16th June at the cost of £75 for groups up to 15 - so you could be touring the UK’s greatest music city for as little as £5 per person! Hurry, only SIX slots are available.


"Entertaining, knows his stuff, tells it well"
Christine A, TripAdvisor May 2018

The time slot is designed to fit into your plans for the rest of Father’s Day – pub, meal, show, whatever – and will feature The Beatles, The Stones, The Pistols, The Clash, Oasis and MORE. Because this is a private tour I’m also taking requests! Where possible I’ll seek out any locations associated with Dad’s favourite band.

The tour meets at Tottenham Court Road tube (exit 1) and will end in Soho, VERY handy for Poppies Fish & Chips, the former home of historic Soho music venue the 2 I’s.